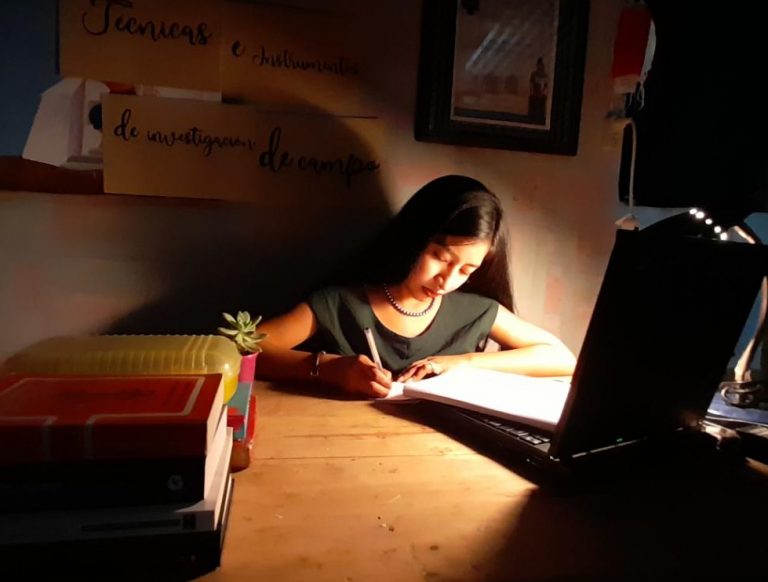 Hi, I’m Julia; my nickname is Chuya. They really don’t have a reason to say that to me, but I’ve gotten used to that nickname. I was born on September 19, 2001. When I was born my parents were happy because they were looking forward to me.  Since I was little, I studied in public schools.  After finishing the pre-primary stage, I entered a primary school for girls in 2007. Since it was a public school, I suffered from bullying, so my mother moved me to another public school, but it was a ‘mixed’ school, that is, boys and girls. That school was undoubtedly the best; my friends loved me and so did my teachers. I finished my primary studies at that school with good academic performance, being an honor student at my graduation in 2013.

Going back a bit, my father died when I was 8 years old. I was still in the girls’ school at that time, and my mother was sad, but that was not a reason to leave her job. So she continued to fight for us, and perhaps that is why the girls discriminated against me, because no one was bringing me to school; I had to board the bus alone. Even the teacher came to hate me, and sometimes they asked for money that my mother could not give, and the teacher always threw it in my face in front of my classmates. Sometimes I didn’t have money for the repairs of the school, and they also bothered me about that. I still don’t remember how I got the strength to move on. What I believe is that the situation in which I saw myself gave me the desire to want to improve myself and move forward. The truth is very sad because even my family moved away, and no one reached out to us. My brother who died 5 months ago was the one who stopped studying at only 16 years old and started working and helping my mother with what he could.

When I was little, I watched how my mother and my mother’s second child earned money for the roof and food. They sold nuégados (sweet bread), bagels and bread in baskets. That small shop belonged to my grandfather, but my grandfather was a very strict person and he beat my mother and older brothers with sticks or chains with which they tie the dogs, despite the fact that my mother was already a woman and that my brothers were not his children. These circumstances made my mother leave there, and she took us with her to rent a room. That was when the money was most needed, so my brother went to the capital of Guatemala at that time to work to help my mother with the money, and that is how he helped us, until he died this year.

We went to live at the place where we rented in 2008,  and in that place there were many problems with the other neighbors, so we changed neighborhoods. This time we would live in a house, a very humble wooden house that was almost abandoned. They rented it to us but there was no electricity. That did not matter to my mother because the rent was affordable. Despite the fact that the house was already old, in the back it had a large patio with trees, flowers and fruits. So we lived there for 8 years. Undoubtedly I did not live a normal childhood and adolescence; my house at that time was not in a rural area, but I had no electricity, I never had a computer (until now that Lic. Jorge Paque from GSSG gave me one), I had my first cell phone at  17. All those things made me realize that for me, studying was very necessary and this changed my future.

I studied and did my homework with candles. We had dinner by the light of two candles every night, which ruined our eyesight, and I have to wear glasses. My eyes are bad; the prescription strength  of the glasses I need are high and that makes them more expensive. As I said, my uncles did not have any kind of concern for us, which never really affected me because my mother always fed us, but it was little, and therefore we were very thin. My mother gave us tomatoes with tortillas, or in a tamale, for four of us to eat;  it was always like that.

After 8 years of renting, we went back to live with my grandfather, but my grandfather was a different person. Now he worked in the sale of purified water and he did not show us affection, but he also did not hate. Although now that I read it it seems a bit crazy, I think it was the best thing for us; we always ate healthy so that spared us from many diseases and kept us from getting overweight. In 2013 I continued with my studies at the largest institute in Cobán, Emilio Rosales Ponce, which many students want to enter, and those of us who are admitted are very happy for the education that we receive.  I studied basic and diversified there, and my educational progress was very satisfactory.  I finished my basico (middle school) in 2017. My mother worked as a domestic worker when I studied and I am grateful to her for having made an effort for me and my brothers.

I continued studying diversificado (high school) in the same school in 2018. When I started it was very difficult for me to adapt; I had to plan my study time much more carefully and was at a disadvantage because other students had computers, while I had to learn from books. The other students helped me and little by little I adapted. and everything went very well. I was very anxious to finish my mid-level degree but the pandemic cancelled my graduation ceremony.  Also, my mother lost her job and we no longer had enough to eat, so she invested her last savings in selling vegetables outside of our house.  She took advantage of the fact that no one could leave the neighborhood and there were curfews, so people came to her for fresh vegetables.  She then put a tortilla shop in, which we have to manage now because my mother became ill.  Unfortunately, they discovered a cancer in her stomach at the end of last year, which she is struggling with and God has helped her.

This year I decided to study law and I have loved the learning, but it is difficult for me because most of the work is by computer, and I do not yet have the proper skills.

The most important thing that has happened this year is that God has come into my life in a very kind way and I got baptized.  I decided to give my life to God and many things have changed for the better.  I am currently part of the children’s ministry of my religious congregation, and a youth leader.   I love to preach how God works in my life so that other people can see it as motivation to keep going.

Since the Guatemalan government only funds education to the end of elementary school, it is not all that common, especially in the rural areas, for someone to graduate from middle school. Thus, these students are awarded an actual degree, called the Basico, which carries some weight when looking for a job, etc.

High school comes in a variety of flavors in Guatemala. All of course are private, and there are seemingly as many curriculums as there are schools. Some high schools focus on particular careers, such as teaching, accounting, surveying, etc. Usually, it takes 3-4 years to complete, and they are awarded with a certificate of competency at the end. In teaching, the certificate entitles one to teach at the elementary school level only. More academically-oriented high schools have a curriculum similar to US schools, which includes language arts, math, science, history, etc. These typically require 4-5 years to complete, and graduates are awarded the Diversificado degree, which is required if the student wishes to continue their education at the University level. This is the degree that most GSSG-supported high school students are pursuing.

The University system in Guatemala is like the high school system, in that there are many degrees, and many ways to get a degree. There is only one public university, the University of San Carlos, and about a dozen private universities. Like high school, students can decide early to specialize in a particular field, and after 2-3 years, graduate with a “tecnico” degree. In education, this degree awards them the title of “Profesor”, and qualifies them to teach all the way through high school. For those wishing to go further in Education or other fields, there is the “Licenciatura” degree, which is awarded after four years of study in one’s major plus an additional year researching and writing a thesis that addresses some national problem in Guatemala. So far, three GSSG students have been awarded their Licenciatura degree, with several more hoping to have theirs by next year.