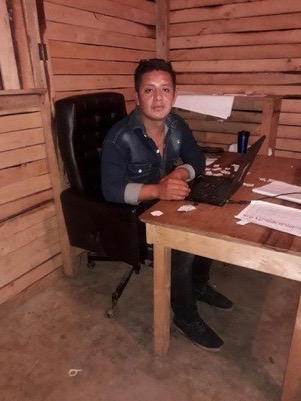 My name is Milton Javier Cap Ramírez.  I am 24 years old and I live in the village of Chiallí, Tactic, Alta Verapaz, Guatemala.  I have two brothers and two sisters, and I currently live with my two brothers and one of my sisters. I study at the Mesoamerican University, located in the municipality of San Pedro Carcha, in the department of Alta Verapaz. I am currently studying for a two-year degree in Secondary School Education in Social Sciences and Humanities, and I hope to graduate with a bachelors degree in teaching, if God allows it, in the year 2023.

It is incredible how things change over time.  I remember that when I was a child I went with some friends to the mountains to get firewood, because we did not have the money to buy a load of firewood. Firewood was used by my mom to cook, whether it be to make coffee, make cakes, prepare food, etc. It turns out that when I went for the first time, I couldn’t tie up my load of firewood, so my companions got angry because I didn’t hurry and they left me lost on the mountain.  Later, crying, I carried my firewood and ran to catch up with them, but they had already gotten way ahead because they were walking very fast and they were older than me.

Then I had the opportunity to work in the fields with a neighbor; after having such a bad experience getting firewood with friends, I thought it would be better to work and earn the money to buy firewood. In the beginning everything was going well until the work began to be more complicated. I was just entering high school, and I studied in the mornings and in the afternoons I worked. Sometimes, when it was my turn to clean at school I would come home late and there was not enough time for lunch, because my boss wanted me to come to work at 1:00 p.m. Sometimes when I was late he would scold me, so I learned to arrive at least five minutes earlier and many times I went to work without having lunch, and all because of wanting to be punctual. I was working in the field for several months, but one day they sent us to the summit of the mountain to bring back some goats and I had to bring a large goat. That afternoon it was raining and there was a lot of mud, so when coming down from the summit the goat slipped and almost crushed me and I was very scared. When I got home I told my mom, and she told me that she no longer wanted me to go to work in the fields. After that, I got a job in the town market working as a vendor, but I only worked there for three months because I had to work eight hours a day, so I could only work during vacation.

At the age of fifteen I learned to work as a bricklayer, because the work was very profitable for me.  I had the opportunity to be in charge of jobs from a very young age. I had a sufficient salary to help my family, since my father was seriously ill due to epilepsy and my mother was beginning to suffer from diabetes. After approximately one year and six months my luck changed; because I was a minor the employers began to scam me to the point I found myself unemployed.  I got a job with other friends, but the salary was not enough to cover family expenses; however,  it was the only means by which I could help the family. Although the work was very heavy and exhausting, the salary was not fair.

When I made the decision to continue studying it was when my body reacted very badly to a very hot climate, because where I live the climate is cold. So I looked for a way to get the means to study, and Byron Cap [a former GSSG scholarship student; now serving on the GSSG board and running projects in collaboration with GSSG] had the opportunity to get me financial support in an educational institution to study at the diversificado [high school] level. So I enrolled in the bachillerato (pre-college track) with an orientation in teaching. My intention was just to continue studying; I had no goals, much less imagined working as a teacher. Today I realize that being a teacher is a great opportunity to be a leader and be an example for other generations.

I am noticing and beginning to analyze the issue of corruption, since it is currently affecting Guatemala. If we realize it, there is no corruption that lasts more than 200 years; however, this corruption continues. This is because corruption has become a part of culture for our city; we just naturally say, “There’s corruption.” The fruit of corruption occurs in politics or in the highest positions, but corruption is born in the family, from the moment we teach our children to lie . Scientifically it is said that children only do thirty percent of what the parents tell them, and the other seventy percent of the time they imitate the parents. Suppose a father tells his son “lying is bad” but it turns out that a friend calls and the child answers and the father tells the child, “Tell him I’m not here.” The child will know that lying is bad, but he will automatically be learning to lie. So I want to be one of the people who fights for the true education of young people and children, for that reason I want to earn a bachelor of education, and thus contribute my bit to the educational community.

This year I made the decision to acquire a motorcycle. The reason was that it was difficult for me to get to work (I reapplied as a bricklayer).  In the masonry work, my clothes got dirty and the minibuses prohibited me from boarding because I was very dirty. Another reason I acquired the motorcycle is with the intention of motivating friends and other bricklayers who are lost in vices and in gangs, to show them that we can achieve the things that we want to. This has worked up to today; last year in the village only three people had a motorcycle, now we are approximately twelve young people who have motorcycles to transport ourselves to work.I am currently studying for a profesorado (2-year teaching degree) in secondary education.  My goal is to complete my licenciatura [bachelor’s degree] in education and work for the Guatemalan Ministry of Education, and to be one of the best educators to the point of being an icon in the educational field. I have been learning to manage a budget so that I can manage my salary. I hope to receive only enough to live and cover my basic needs, since I think that money will never be enough in life, because we will always want to have more money than others. Life taught me a clear example about this: at first I earned 10 quetzales, then I wanted Q20, then Q30, Q50 . . . and the truth is, the more I earned, the more money I also spent. Most people in Guatemala complain about the living conditions, many say “We are poor,” but we do not realize that we consider ourselves poor depending on the person we compare ourselves with. If I compare myself with Cristiano Ronaldo or Messi, obviously I am poor because they have better living conditions than me, but if I compare myself with a person who lives in a shack, obviously I have better living conditions than that person. I learned that money is not everything in life and not everything is about getting paid. We can also earn a lot by participating in different activities as a volunteer. What I think for the moment is that all I need is to cover my basic needs.

Since the Guatemalan government only funds education to the end of elementary school, it is not all that common, especially in the rural areas, for someone to graduate from middle school. Thus, these students are awarded an actual degree, called the Basico, which carries some weight when looking for a job, etc.

High school comes in a variety of flavors in Guatemala. All of course are private, and there are seemingly as many curriculums as there are schools. Some high schools focus on particular careers, such as teaching, accounting, surveying, etc. Usually, it takes 3-4 years to complete, and they are awarded with a certificate of competency at the end. In teaching, the certificate entitles one to teach at the elementary school level only. More academically-oriented high schools have a curriculum similar to US schools, which includes language arts, math, science, history, etc. These typically require 4-5 years to complete, and graduates are awarded the Diversificado degree, which is required if the student wishes to continue their education at the University level. This is the degree that most GSSG-supported high school students are pursuing.

The University system in Guatemala is like the high school system, in that there are many degrees, and many ways to get a degree. There is only one public university, the University of San Carlos, and about a dozen private universities. Like high school, students can decide early to specialize in a particular field, and after 2-3 years, graduate with a “tecnico” degree. In education, this degree awards them the title of “Profesor”, and qualifies them to teach all the way through high school. For those wishing to go further in Education or other fields, there is the “Licenciatura” degree, which is awarded after four years of study in one’s major plus an additional year researching and writing a thesis that addresses some national problem in Guatemala. So far, three GSSG students have been awarded their Licenciatura degree, with several more hoping to have theirs by next year.